The number of active rigs fell by 18 to 868 nationwide, the lowest level since May 2017, according to the Baker Hughes North America rig count.

The Permian Basin is shared between Eastern New Mexico and West Texas. The basin now uses a whopping 42 gallons or so of water each year.

This article covers a new hot topic in the energy industry: the use of water and waste of water in fracing and the potential to reuse and recycle that water. To do that, at scale, multiple influencers need to be on board. That’s exactly what New Mexico Governor Michelle Lujan Grisham announced last week, pulling together just about every office and university needed to begin studying how to treat and reuse produced water.

“Turning this waste product into a commodity is good for preserving fresh water resources, good for compact requirements with other states, good for conservation purposes, good for local and county governments,” she said.

Extractive activities such as mining and oil and gas only account for ~1% of Texas water usage, but fears of increased water use from more drilling, longer laterals, and multi-stage frac jobs that require more proppant highlight the importance of finding ways to recycle and reuse the water instead of injecting it back into the ground through disposal wells.

The Texas Alliance of Energy Producers released a new whitepaper titled “Sustainable Produced Water Policy, Regulatory Framework, and Management in the Texas Oil and Gas Industry: 2019 and Beyond, by co-authors Blythe Lyons, John Tintera, and Kylie Wright. You can download the report for free with the link above.

A press release by Texas Alliance of Energy Producers summarized the report as the following: “The report provides current data on produced water supply and disposition, highlights technologies and trends, explores the Texas and federal regulatory and policy landscape, provides examples of recycle and reuse, and analyzes the impediments to improving produced water management. The report concludes with a set of 10 recommendations to address these barriers as well as increase opportunities to reuse and recycle produced water safely and economically.”

“Disposal options must be considered and maintained. Going forward, disposal capacity may become limited, which will require more support from produced water treatment for recycling and reuse,” the report read.

Ross Wilkerson and Stephen Forrester, NOV, USA, reveal how a new bit design and cutter layout have been enabling performance improvements in the Permian Basin.

“Drill bit design evolves at a faster pace than that of arguably any other downhole tool used in the oilfield, with each new design building on the last.”

Drillers want bits to achieve record runs, meaning go farther before they need to change the bit. The design of the bit, as well as the placement of cutters on the bit, factor into the performance.

The article is about NOV’s ReedHycalog business unit that developed a new Chainsaw cutter configuration, comprised of ION 3D cutters on the Tektonic drill bit platform.

Against five other competitors, the ReedHycalog Tektonic bit with Chainsaw cutter layout achieved high average ROP performance in operations within a 15-mile radius of the pad in Andrews County, US, with excellent performance when distance drilled exceeded 5,000 feet. The drill bit averaged 174.8 feet of penetration per hour, the highest of all compared bits.

“With varying efficiencies and stage lengths, diesel fuel usage can exceed 20,000 gal/d for the frac pumps on one fracturing spread of equipment. A proven way to significantly reduce fuel consumption is to use dual-fuel operations. Properly executed dual-fuel operations can reduce the amount of diesel fuel a fracturing spread uses by as much as 55%.”

The conversation of dual-fuel engines is nothing new. Caterpillar, Cummins, and MTU all offer conversion kits for their Tier II engines that can provide 70% diesel displacement. Caterpillar can even get up to 85%. Upon hearing the push from diesel to natural gas, many readers will wonder why an engine has to use diesel at all. Why can’t it just be an all-natural gas engine? The article answers that question well. “A diesel engine cannot run solely on natural gas because it needs the diesel burn to act as a spark plug in the engine to ignite the natural gas. This is because the auto-ignition temperature of natural gas is higher than what can be achieved in a diesel engine.”

Please read the article for more information on the cost savings factors and optimal conditions to run a dual-fuel engine. 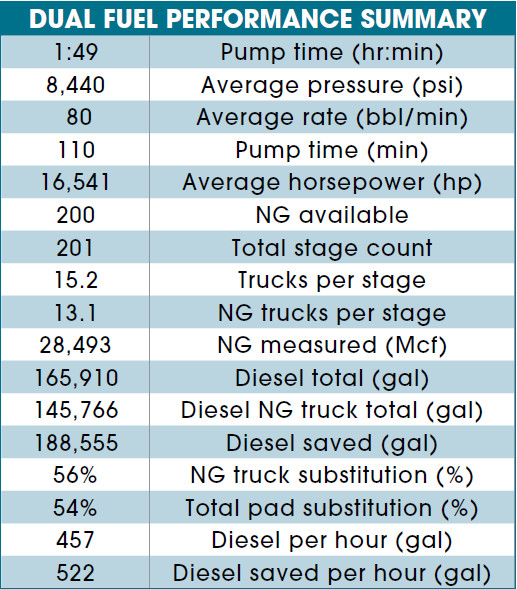 “U.S. oil output from seven major shale formations is expected to rise by 74,000 barrels per day (bpd) in October to a record-high 8.843 million bpd, the U.S. Energy Information Administration said in its monthly drilling productivity report.”

“The EIA said producers drilled 1,247 wells and completed 1,389 in the biggest shale basins in August, leaving total drilled but uncompleted (DUC) wells down 142 at 7,950, their lowest since November 2018.”

“In much of the Permian, a region that stretches across West Texas and New Mexico, the amount of oil that can be recovered from child wells is on average about 20% to 30% lower than that of the parent, the analysis shows. That means overall production from a particular area could be some 15% to 20% lower than projections made by producers.”

We’ve talked about the decline in performance between parent-child wells in this newsletter, most recently in last week’s issue focused on U.S. production. A 20-30% decrease means that achieving the same production from the Permian will require a lot more wells, and growing production will be even harder. 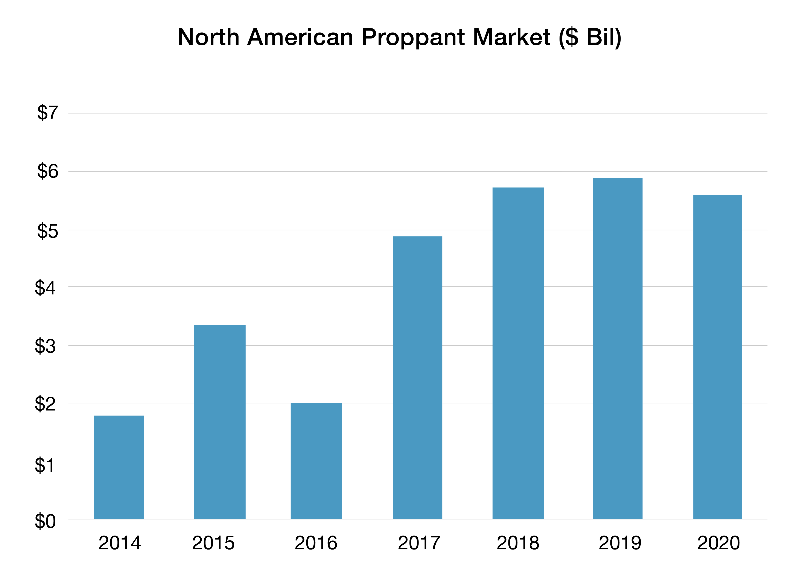 “The North American proppant market is projected to total almost $5.9 billion and over 100 million tons in 2019, driven by longer laterals and an increase in the amount of proppant used per frac stage. At the same time, in-basin supplies are projected to account for 60% of the North American proppant market in 2019 due to their significant cost advantage versus traditionally-sourced Northern White Sand.”

The Proppant market report is a useful planning and benchmarking tool for operators, oilfield service firms, OEMs and investors. “The quarterly report tracks and forecasts the North American proppant market, focusing on commercial, technical and activity trends within the sector.  Information in the report includes: market size and growth ($ and volume); revenues and market share by company; demand by region; sources of supply; technological specifications; sand logistics; and a profile of the leading proppant suppliers.”

The article cites a sensational find by the EIA, that “Delaying a completion by as many as 4 years has “little effect” on the initial production level.” This conclusion bodes well for the United States Drilled but Uncompleted (DUC) count that has ballooned in recent years. As mentioned in the Oil & Gas 360° article in the upstream section of this newsletter, the count has fallen to its lowest level since November 2018. There are many reasons for a rising DUC count. Oil prices may be too low to warrant a well completion. Pipeline demand may have exceeded takeaway capacity in certain regions. A producer may want to maintain consistent positive free cash flow by gradually bringing wells online instead of all at once. Whatever the reason, drilling a well and knowing its yield won’t degenerate for four years is reassuring.

“Some people say you cannot fracture a well drilled more than a year ago,” but the data says otherwise, said Jozef Lieskovsky, a senior analyst for the EIA who co-authored the report.

If you’re interested in fracing technology, completions, and drilled but uncompleted wells, I highly suggest you read the report or at least check out the Journal of Petroleum Technology article.

“With India currently getting more than half of its electricity from coal, Indian Prime Minister Narendra Modi wants to grow natural gas to make up 15 percent of the nation’s power generation mix by 2030.”

Adding to the growth will be a planned reduction in the corporate tax rate from 35% to 25%.

“Touted as one of the largest liquefied natural gas deals in U.S. history, Petronet LNG will invest in Tellurian’s planned Driftwood LNG export terminal in Lake Charles, La., to secure 5 million metric tons of LNG per year. The deal comes amid rapidly growing energy demand in India and record production of crude oil and natural gas in the United States, driven by horizontal drilling and hydraulic fracturing in the nation’s shale plays. India buys most of its oil from the Middle East but imported more than 13.9 million barrels of U.S. crude oil in June, figures from the U.S. Energy Information Administration show. The subcontinent imported more than 57.6 billion cubic feet of natural gas from the United States in 2018, ranking India as the fourth largest importer of U.S. LNG.”